Pajeel Ali is a character that appears in Cardfight!! Vanguard: Asia Circuit.

Ali fancies himself a ladies man though this is more exaggeration than fact. However, he does care a lot for his S.I.T. Genius teammates. He does comment on other's relationships though, especially in regards to Kenji's failed attempt to comfort Yuri. He also calls the Chen sisters 'bambinas'.

Ali is a student at the Singapore Institute of Technology along with his friends Christopher Lo and Lee Shenlon. He is shown to be rather hot headed and flusters easily but is also not above making others flustered as is shown with him teasing Kamui Katsuragi. He is a member of Team S.I.T. Genius along with Chris and Lee. Ali's goal is to get lots of girls to like him and become his fans through his Vanguard playing. During the VF Circuit, he lost against Kamui Katsuragi and was confronted by Christopher Lo because of that loss. Later he won against Gai Usui. 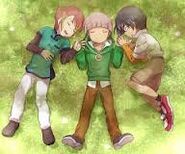 Retrieved from "https://cardfight.fandom.com/wiki/Ali_Pajeel?oldid=2207913"
Community content is available under CC-BY-SA unless otherwise noted.