"Asuka Matsumoto" is the main protagonist of the manga series Cardfight!! Vanguard Shooting Star and Another Vanguard: Star Road Asuka. Despite being a high school student she is the manager of the card shop "Shooting Star" while her father is missing. She also possesses the mysterious power to hear the voices of the cards and the ability 'Meteor Drive Check'.

Asuka is a young girl with coral hair and blue eyes. She is usually seen wearing a pink hoodie and black knee high stockings with her school uniform and casual attire. Her casual attire consists of a plain white T-shirt and blue short jeans.

Asuka is funny, friendly and quite optimistic, displaying confidence in her deck and skills no matter how hard things get. Generally appearing light-hearted, under certain circumstances she acts in a serious manner.

Asuka uses a Union Verse deck focusing on Super Star, Millionaire. The deck was originally owned by her father.

Asuka in her manager suit 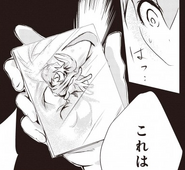 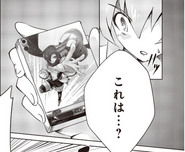 Asuka's units talk to her

Her appearance as Millionaire

Her appearance as Millionaire

Retrieved from "https://cardfight.fandom.com/wiki/Asuka_Matsumoto?oldid=2809056"
Community content is available under CC-BY-SA unless otherwise noted.