Card Capital (カードキャピタル Kādokyapitaru), or simply "Capital", is a card shop in the original Cardfight!! Vanguard series, which is frequented by the main cast. During the events of seasons one through four of the anime, and in the manga, the shop is run by Shin Nitta and Misaki Tokura, and occasionally, other members of the cast work part-time. The store was previously owned by Misaki's parents before they passed away. The store boasts a play space, including two "Standing Fight Tables" constructed by Shin, and holds events such as shop tournaments.

In Cardfight!! Vanguard G, Misaki is the owner of the entire brand, which has acquired a second store known as Card Capital 2. 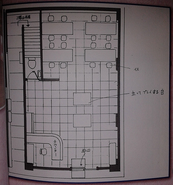 A blueprint of the shop

Card Capital's simpler design in the Cardfight!! Vanguard (V Series Anime)
Add a photo to this gallery
Retrieved from "https://cardfight.fandom.com/wiki/Card_Capital?oldid=2806093"
Community content is available under CC-BY-SA unless otherwise noted.