Cardfight!! Vanguard: Cray Wars was a Japanese mobile game app produced by Bushiroad. It's a combination of both the series TCG's elements with those of strategy and role-playing games. The game was released for iOS and Android on March of 2013.

The game stopped being supported in 2016 and was later removed from both app stores.

The Virtual Vanguard System which generates a virtual world of Cray, a earthlike planet where magic and science progressed hand in hand. It allow the player's avatar to venture the dreamlike planet to fight the daily missions of one of the six nations. However, a sudden and strange abnormality upsets this life.

Depending on which nation you choose from (there are four optional nations to explore), the quests will differ, but will generally be the same. Each quest will have you explore the region and others are dungeon quests. Each quest will offer different rewards.

After creating your character and getting settle in with the gameplay, you are given four different countries or Nations to explore. Note: Navica will change outfits depending on which Nation is chosen. Each Nation will have it's own maze that you can explore and conquer. You will encounter some puzzles that can can help you solve the abnormality that is currently running amok in Cray.

You can once in a while encouter a boss. They are usually a space colored much differently from the others and they glow a purple light color. When you step on it, it will trigger a fight. The boss is a SR level card and they are tougher to beat than normal dungeon bosses. When you beat them at a certain enough of time, you may be able to obtain the boss card itself. If you can't beat it, the boss would disappear and respawn in a different or the same spot over time.

There are two types of decks: one for dungeons and one for battles.

Each deck is comprised of only 6 cards. Each card has it's own effects that triggers depending on the cards use. The one for dungeons primiarly uses cards that avoid traps and manipulating the die (singular: dice). The battle deck cards uses effects that helps boost damage or take less damage, but the effects can only be triggered by the what the cards position in relation to each other.

Each card is gain through different methods in the game. Some are given out during events, promotions, gifts, rewards, codes and boss fights. Cards can be brought through gold obtain throughout the game.

All the cards will be in full art form. They will retain their elements like their card counterparts, but with other skills that help the player's avatar on their misson.

Each card will have a hp bar. When cards take damage, their hp bars will shrink down in size. Once all the hp is gone, the card will disappear from the field and into the graveyard. Don't worry though they will not disappear from your deck forever.

Each card will differ in strength. Some may be good at dice rolling or attack power. Same cards will also differ from each other. For example: If you have two Battle Sister, Cocoa then one can be strong on dice rolling while your other Cocoa is strong on attacking. Each one will be different depending on how they are obtain.

All cards will have a Cost or the number that is needed in order to put it in your deck. Each card will have their own number cost.

Like most TCG app games, there is a rarity factor. The higher the rarity, the more powerful it is, however, it will have a higher cost in order to play it.

C or Common: the basic and generally the weaker cards. They are easy to find and often used for leveling up cards.

N or Uncommon(not sure on that): Cards that are a bit harder to find though its a bit easy to find them throughout the game. Just keep exploring and you can find one pretty easy if you try hard.

R or Rare: the stronger cards. They are a little harder to find. Most are dungeons rewards given at the end or through a gold space.

R+ or Rare plus: these cards are much higher to find, but can be obtain through missions. Much stronger than most cards.

SR or Secret Rare: these cards are the highest rarity and the hardest to obtain throughout the game. The most powerful cards and the ones that has higher cost. Some are obtain through dungeons, gifts, codes or promotions.

This process is the most delicate thing about the game. Depending on how you level up your cards will determine your outcome of your battles. Cards can level up on it's level as well as their skills. So that any two players that may have the same card, but with wildly different stats.

To level up your cards, it will take a certain amount of gold. The amount is determine by the number of cards are used for the leveling and what the level the card is.

There are a number of dungeons that are either hidden or found throughout Cray. They will generally be unlock through level requirements.

The dungeons will reset each time you enter them. Each dungeon will be different on level and difficulty. The floor will be riddled with traps and will require thinking and luck to avoid them.

The red tiles are with a sword pic meaning they are battles. Enemies that want the treasure at the end, fight them to win gold and exp.

Some tiles will have random effects to them. Either you lose a turn or hp. They are generally the blank spaces that you think are fine, but is a trap instead!

The battles are all auto-battle. They will fight by themselves, but the outcome will be determine by the card levels and effects that is compile in the deck.

PvP: you use your normal battle deck to fight against other players that you encounter. In order to fight, you must be on the same row as the other person. Example: two other players are on the same lane as you. You can't fight anyone that is not on your lane like a player on a parallel row, but you can't reach them. Another thing is that you muct be close to them to declare a match. You can't be like two spaces away and challenge someone, you must be at least one space or so to battle. You can challenge someone through a list of opponents given.

Regular battles: they are battles you encounter throughout the game. Mainly through missions and dungeons.

There is also territorial battles. This type of battle allows up to 20 players to play. The four countires are divided into two groups and they battle each other out. The final winner can occupy the territory and explore the land. Its occurs every Saturday and Sunday.

There is a home button that will lead you back to your nation. There is also a chat box that allows you to talk to other people, guild, private or world. The middle button is the dice roll in where you press it, the dice will roll to tell you the number of spaces you can move. A deck editing button in where you edit your deck, removing cards and putting cards in.

VC or Vanguard Coin is an in-app purchase cash. They are purchased through real life money and used to buy in-game items such as potions that restore BP or Stamina. Other things that can be purchased are customization features or cards throughout events and such.

Gacha is a common thing that players would use to get items. Using VC and special coupons, you can insert them in a machine that will randomly give you any items such as potions or cards. Each time you use it, it will consume a set amount of coupons and VC.

Special codes can be found in first print boxes of Booster Set 10: Triumphant Return of the King of Knights, Vanguard Fight CD, and in ENDLESS☆FIGHTER CD.

Users have found that the game is region locked, preventing any outside devices other than the region of Japan to download the game. This caused many problems for those who are of Japanese litertes, but living outside of the country the opportunity to play the game, denying them.

Navica, a character that helps the player's avatar on gameplay.

A deck compose of SR cards.

A player's avatar stepping onto a yellow tile.

A screenshot of the game.

A look at the cards.

Leveling up a card.
Add a photo to this gallery 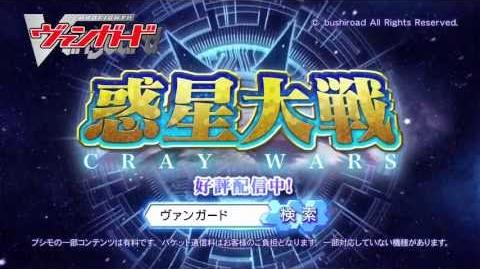 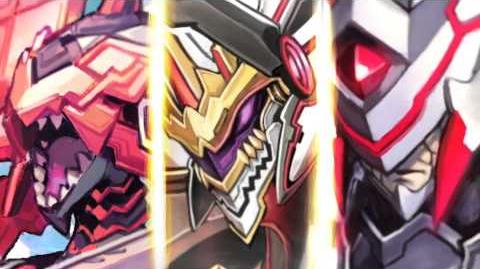 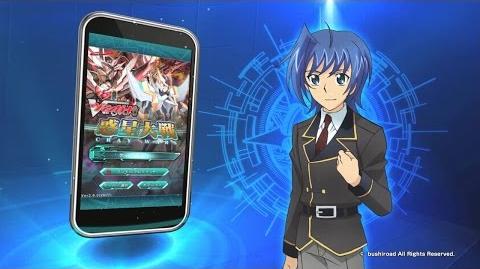 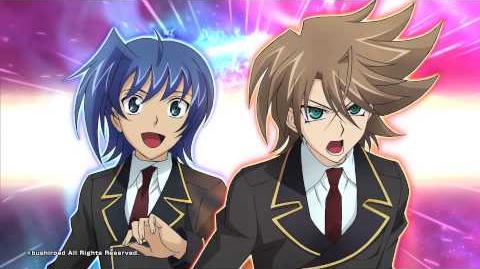 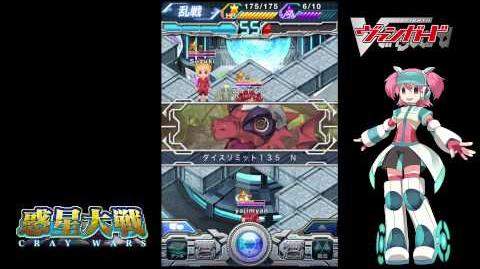 Retrieved from "https://cardfight.fandom.com/wiki/Cardfight!!_Vanguard:_Cray_Wars?oldid=2653314"
Community content is available under CC-BY-SA unless otherwise noted.