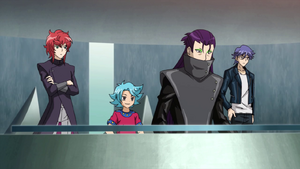 "Company" (カムパニー Kamupanī) is a group of antagonists in Cardfight!! Vanguard G: Stride Gate who work for Ryuzu Myoujin, helping him achieve his goal of gathering the 12 Zodiac Time Beasts in order to open a Stride Gate that connects Earth to Planet Cray. The group was disbanded after Ryuzu's defeat and all of them went their separate paths.

According to Shouma Shinonome, members of the Company are not Ryuzu Myoujin's subordinates, and are free to do whatever they want, as long as they agree with Myoujin's ideals, as "Comrades who share the same will".

As the group was disbanded, all of the following are former members.

Retrieved from "https://cardfight.fandom.com/wiki/Company?oldid=2843659"
Community content is available under CC-BY-SA unless otherwise noted.