The Depend Cards are a major plot element in Cardfight!! Vanguard G.

The Depend Cards are introduced as blank cards. According to Yuichirou Kanzaki, in the hands of a regular cardfighter they're nothing but useless pieces of cardboard, but if their true power is awakened they can create a "godlike unit". The mysterious Gear Chronicle user instead described it as "the power to transcend the world". Regardless of its definition, a powerful imagination is required to use them. Kanzaki also came to the realisation that Gear Chronicle has the power to awaken them.

Ibuki later explained that Depend Cards can summon units from Planet Cray to Earth. When this happens, they become a card that represents that unit. These summoned units can be controlled by whoever wields their card and are powerful enough to destroy a large building, such as when Am Chouno used Chronocharge Unicorn to destroy United Sanctuary Branch. However, it is shown that using the Depend Cards in this way can be physically exhausting on the user.

Turning a Blank Depend Card into a unit can damage the users' physical health and even shorten their lifespan, especially if the unit was forcefully summoned. Ryuzu was a victim to this; as he summoned more units he quickly became an elder and ultimately died, forcing him to rebuild himself in a clone body.

While traveling around the world, Ibuki encountered a mysterious man who told him about the Depend Cards, and that the world will be destroyed if they are not used properly. The man gave Ibuki the Gear Chronicle clan and entrusted Ibuki with a mission.

After losing to a mysterious fighter who wielded a "godlike" unit, Kanzaki made it his goal to obtain a godlike unit himself and defeat that cardfighter. For that, he obtained a Depend Card and became the United Sanctuary Branch Chief. He created an overly harsh training program to turn anyone and everyone participating into strong cardfighters. While the program seems to give good results, it's real objective is to gather the imagination and feelings of the signed fighters to fuel the Depend Card, which he calls "Stride Force".

Ibuki began sending Gear Chronicle cards to Chrono Shindou secretly, including an already activated depend card called Chronojet Dragon, and guided him to become stronger. During the special match between Team Demise and Team TRY3, Ibuki stole the Depend Card and erased all the research regarding it, then ran away from the United Sanctuary branch, but not before instructing Kamui Katsuragi to give it to Chrono. While angered by this, Kanzaki remained confident that he would recover it. During the battle between Chrono and Kanzaki, Chronojet Dragon overloaded the GIRS that they were fighting with and appeared to physically assault Kanzaki as Chrono dealt the finishing blow.

Later, during Chrono and Ibuki's third fight, the Depend Card transformed into Chrono Dran, the unit that traveled with Rive Shindou. At the moment Chrono Dran talked to Chrono in a vision, Rive released him to go somewhere. After Ibuki was defeated by Chrono, he explained the Depend Cards' nature and that Ryuzu Myoujin owns several of them to fuel his goal of using them to summon units from Cray and turn them into his mindless puppets. In order to counteract this scheme, he created the "Plan G", which involved gathering his friends and using the G Quest to produce enough Stride Force to combat Myoujin's plan.

At the beginning of Cardfight!! Vanguard G: GIRS Crisis, Ibuki sent Chrono three Depend Cards by mail that were originally left for him by his father, all of which are currently awakened after the events at the Star Gate, United Sanctuary and Dark Zone G Quests. According to Ibuki, awakening them was the key to Plan G's success.

After Plan G was enacted, which foiled Myoujin's awakening of the last Depend Card, Ibuki and his friends located and stormed Myoujin's lab, however Myoujin managed to transport the Depend Cards to another location before they could obtain them.

During Chrono's second fight with Ryuzu, the memories Chrono regained revealed that Ryuzu made the Depend Cards seven years ago as a way to control the summoned Zodiac Time Beasts, with Rive Shindou stealing three of them after he sabotaged the plan and took Chrono Dran.

After the fight was abruptly canceled then restarted, near the end of the fight, Ryuzu summoned Chronofang Tiger to attack Chrono. Chrono however then summoned forth Chrono Dran, then fully released the Dog, Mouse, and Sheep to fight against Chronofang. In the ensuing battle, Ryuzu dropped all his depend cards aside from Chronofang. Despite warnings from Dran not to, Chrono grabbed them and fully released each one, only to succumb to fatigue. Ryuzu then took all the released Depend Cards while his subordinates transferred the beasts themselves to his off planet facility.

Thanks to gathering enough Stride Force, Sousuke Wakamizu was able to summon the 12th and final Zodiac, the Monkey, entrapping it within the off planet facility. As such, Ryuzu possesses all 12 Zodiac Time Beasts.

It is later revealed that when Ryuzu was first trying to figure out how to successfully awaken a Depend Card, he appeared in front of Chronofang Tiger on Cray after Chronofang heard and responded to his wish to create a perfect future. Chronofang explained that he had been imprisoned for trying to interfere with the conflict on Cray because his power was deemed too great. Due to having the same goals, Ryuzu freed Chronofang and successfully summoned him through his Depend Card. Doing so caused him to cough some blood, but Ryuzu remained willing to pay any cost to achieve his goal. 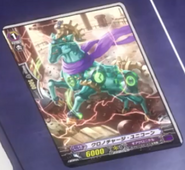 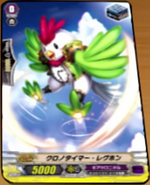 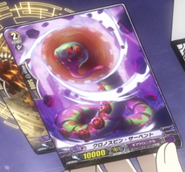 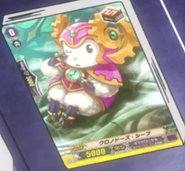 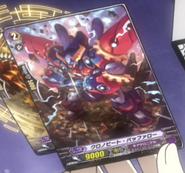 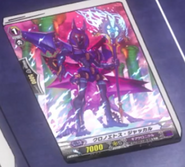 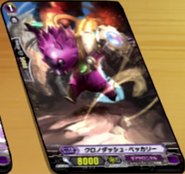 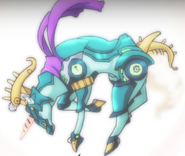 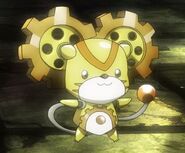 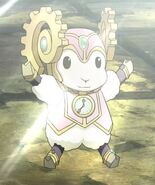 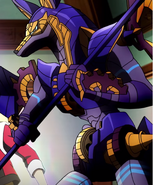 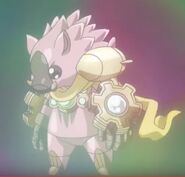 Chronoclaw Monkey
Add a photo to this gallery

Retrieved from "https://cardfight.fandom.com/wiki/Depend_Card?oldid=2119994"
Community content is available under CC-BY-SA unless otherwise noted.