"Armed" likely comes from the aesthetic of the Tachikaze clan. Many units within the clan are militaristic in design, with many units wielding large cannons, guns, and other weaponry. Placing an equip gauge under a rear-guard is likely a reference to "arming" that unit with more weaponry and ammunition. 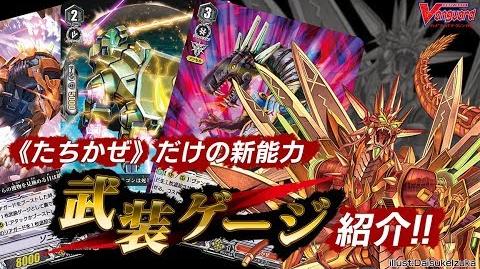 【あそびかた動画】武装ゲージ使い方紹介！
Add a photo to this gallery

Retrieved from "https://cardfight.fandom.com/wiki/Equip_Gauge/Armed?oldid=2887892"
Community content is available under CC-BY-SA unless otherwise noted.