Ichiro Yamada (山田 一郎 Yamada Ichirō) but mainly known as Vlad III(ブラド Burado San-sei) is a supporting character in Cardfight!! Vanguard G. He is the master of his family's manor which he turned into his "Irregular" kingdom.

In order to achieve a Grade 3 FICA level after he was stripped of all his points, Chrono goes on his quest, alongside Tokoha and Shion. He is always accompanied by his two "underlings" , who are both cosplayers. They each wear a costume from a unit of the Dark Irregulars clan, which are Demon World Marquis, Amon and Gwynn the Ripper respectively.

His name is a reference to Vlad III, Prince of Walachia, also known as Dracula. Despite being called a monster, Vlad III is revered as a folk hero in Romania as well as other parts of Europe for his protection of the Romanians both north and south of the Danube.

It turns out that "Vlad" is just a title, and his real name is Ichirō Yamada (山田 一郎 Yamada Ichirō).

As the lord of his own made up mansion, which was converted from his family manor, he dressed up as Abominable One, Gilles de Rais

Ichiro stays in character when he is cosplaying, such as liking the darkness, and fearing the sun. He likes to overstretch somethings, such as standing on accumulated pillows according to the numbers of his soul, and even calling himself "the Demon King that rules the darkness". He looks up to Chrono after being beaten by him in a cardfight, and granted him the title of "Vlad IV", to the latter's annoyance. 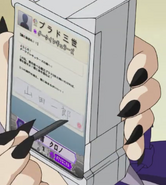 Ichirō Yamada
Add a photo to this gallery

Retrieved from "https://cardfight.fandom.com/wiki/Ichiro_Yamada?oldid=2188431"
Community content is available under CC-BY-SA unless otherwise noted.