"Kageru Garyu" is a character from the manga series Another Vanguard: Star Road Asuka. He works alongside Meteor in the elimination of the Karma cards which brings them to their encounter with Asuka.

Kageru is a young man with black and gold hair and red eyes. He is usually seen wearing a black jacket with gold and white lining over a blue shirt.

Kageru often has a serious expression and acts in a fitting manner though he has been shown to have a softer side, acknowledging Asuka's skills. He appears to have a strong sense of justice, taking it upon himself to eliminate the threat of the Karma cards.

Kageru uses a Union Verse deck with Disaster Zero, Unluck as his avatar. 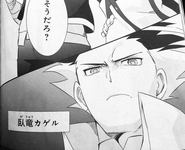 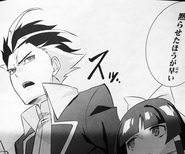 Charcter Sheet
Add a photo to this gallery

Retrieved from "https://cardfight.fandom.com/wiki/Kageru_Garyu?oldid=2809069"
Community content is available under CC-BY-SA unless otherwise noted.