Wyvern Strike, Harold
"Kagura Yamabuki" (山吹 カグラ Yamabuki Kagura) is a character from the manga series Another Vanguard: Star Road Asuka. She is one of the tyrants from the card gang "Crown", known by the title 'Sky Queen'. She also possesses the ability 'Heat Wind Draw'.

Kagura is a young woman with rouge pink hair and red eyes.

She is shown to be wearing a short jacket over a white strapless crop top and blue denim shorts.

Kagura became interested in Vanguard while in elementary school after watching a female Pro Cardfighter win a match live on a tablet. Opening her first booster she obtained Wyvern Strike, Harold. Despite not knowing the rules nor the worth of the cards, she was instantly attracted to the card. With the help of her mother, she built a deck around the card. Suffering a miserable defeat against her classmate, the 7 year old Lepus, Kagura gained the desire for herself and Harold to become stronger after the latter referred to both her and her cards as cheap and weak. Years later having been approached by Miyabi Kurohime with the request to become one of Crown's Tyrants, Kagura was enveloped by a dark power.

Overall an enthusiastic and hot-blooded individual, in the past after being defeated by Lepus her personality took a darker turn. Taking a more aggressive stance while fighting, this would be built upon as she joined with Crown. However, when she was defeated by Asuka it would seem she lost this dark side of hers.

Kagura uses a Kagero deck based on the "Flying Dragon" troop. Her deck is even able to superior ride the ace unit from grade 1 vanguard. 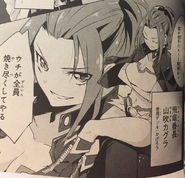 Retrieved from "https://cardfight.fandom.com/wiki/Kagura_Yamabuki?oldid=2880346"
Community content is available under CC-BY-SA unless otherwise noted.