Kei Nagara ( ケイ Nagara Kei) is one of the supporting character in Cardfight!! Vanguard G. Alongside Karl Yamaji and Tsuneto Tado they make Team Trinity Dragon. His Fica level is at Grade 3.

Kei runs a Great Nature deck, using Famous Professor, Bigbelly as his Avatar card. His strategy revolves around powering up his rearguards, and using Omniscience Dragon, Managarmr to make it harder for the opponent to guard them.

In Stride Gate he improves his deck, now using more Bigbelly support. His deck now includes Sage-saint Professor, Bigbelly to massively increase his rearguard's power. He includes more ways to stand his high-powered rearguards, and frequently uses G guardians to quickly increase the amount of face-up cards in his G-Zone to get more power from "Sage-saint"'s effect.

In Next his deck focuses on his new avatar Teacher's Cane of Affection, Bigbelly, along with adding power to his rearguards and increasing his hand size. 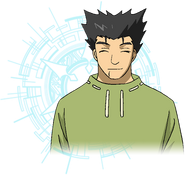 Kei with Tsuneto and Karl in Generation!

Kei with Teacher's Cane of Affection, Bigbelly
Add a photo to this gallery

Retrieved from "https://cardfight.fandom.com/wiki/Kei_Nagara?oldid=2712845"
Community content is available under CC-BY-SA unless otherwise noted.