Zoo. It is a crime syndicate made entirely of sentient insects ruled by their Queen.

Megacolony's main mechanic is the "Paralyze" Keyword, which forces an opponent's unit to [Rest], then that unit becomes unable to [Stand]

or be moved to a different circle by any means until the end of its owner's turn, weakening the opponent as the Paralyzed units cannot attack or boost. If the opponent's Vanguard is Paralyzed, they need to discard one card otherwise they cannot Ride that turn.

Some Megacolony units have the ability to ignore the [Intercept]

of Paralyzed rear-guards, allowing them to threaten the opponent's Vanguard and leave front row Paralyzed units stuck on the field that the opponent cannot use. 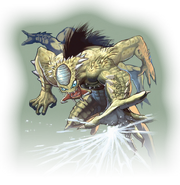 Retrieved from "https://cardfight.fandom.com/wiki/Megacolony_(ZERO)?oldid=2901663"
Community content is available under CC-BY-SA unless otherwise noted.