"Murakumo" (むらくも Murakumo, "Gathering Clouds") is a clan from the nation of

Dragon Empire. The clan was originally a part of Nubatama in the manga. In the lore, they are one of the Dragon Empire's espionage corps. This clan has no known leader, although the "Magatsu" clan has notable standing within Murakumo.

Murakumo's main focus is making use of "clones", primarily in the form of creating duplicates of the player's rear-guards from outside the deck which then "disappear" at the end of the turn, either removing them from the game or adding them to the player's hand. Clones are often given [Boost]

Some of Murakumo's units can also reduce the [Power]

of the opponent's attacking units to grant the player additional defense. 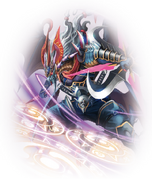 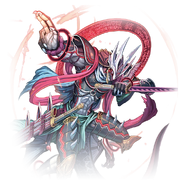 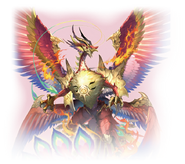 Chakrabarthi Divine Dragon, Nirvana, with Yu-yu Kondo
Add a photo to this gallery

This clan is based off of ninjas and dragons, which is apparent in their designs and playstyles. Despite being a clan of the Dragon Empire, the majority of the units are not dragons, but of other races such as demons, beasts and ghosts. Like it's counterpart Nubatama, the clan is heavily influenced by Japanese culture, with a brighter color scheme and a focus on wind and clones. Most of the units have "Stealth" in their titles, as well as a type of stealth, and a form of being, whether it be "Rogue", "Beast", "Fiend", or "Dragon". Many units have designs based off of the Muromachi period of Japan, as well as some kabuki influences. The inhabitants of this clan are demons, beasts, ghosts, and dragons.

Retrieved from "https://cardfight.fandom.com/wiki/Murakumo_(ZERO)?oldid=2901649"
Community content is available under CC-BY-SA unless otherwise noted.