The Nations (国家 kokka) of Planet Cray are similar to the countries of Earth. They have clans to represent themselves. There are many different races on Cray as well, which form these clans. The nation is not an important part in terms of gameplay, but even so, it is a characteristic seen in almost every card. Currently, the icon of a nation appears printed at the right of clan and races in the cards. There are 6 nations, each of them having at least 3 clans.

series, which takes place 3000 years after the events of the original Cray's timeline, most of the nations have been reformed into new nations. For gameplay purposes, nations now take the place of clans where the player's deck only contains cards from one nation.

Keter Sanctuary is one of Cray's youngest nations, formerly known as the United Sanctuary. Once a holy kingdom, it now consists of floating island and a social divide between those than live upon the island and those that gaze up at it. This nation's color remains being Yellow.

The only nation to keep its name even after 3000 years, the Dragon Empire continues to boast its great military prowess and enormous landmass. This nation's color remains being Red.

A nation that served as Cray's Star Gate. With the goal of preparing for the return of the Void, the nation took upon the name Brandt Gate and protect the outer boundaries of the planet. This nation's color is Silver with cyan-colored lines.

Dark States was once the fractured nation Dark Zone, however after a period of turmoil the nation was brought together under the leadership of one hero who sought a cooperative relationship with Dragon Empire. This nation's color is Dark Blue.

Once known as the prosperous nation of Zoo, with the loss of divine blessing the nation fell into disarray until the Great Sage, Stoicheia created the Wise Cube. Those who followed their teachings would establish the new nation of Stoicheia, accepting the citizens of the former nation Magallanica into it. This nation's color is Dark Green.

Situated upon a flying whale, this nation houses the former inhabitants of Magallanica, the Bermuda Triangle clan. This nation's color is Pink. 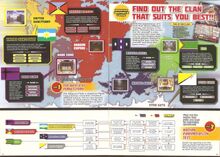 This small nation follows a monarchical system of government; lead by the Burton Royal Family. The United Sanctuary is stated to be a holy nation, which combines old traditions with scientific technology. This nation's color is Yellow.

The largest country by far, the Empire is a military nation ruled by an Emperor. Dragon Empire holds a longstanding rivalry with United Sanctuary, doubtless due to being closely situated nations. This nation's color is Red.

Situated at Cray's southern pole, Star Gate's landmass is a spaceport. Aliens, Battleroids and entities from alternate realities gather here. The former invading clan known as Link Joker resides in this nation after being purified and becaming a part of Cray. This nation's color is Gray (For Link Joker only, red-colored lines are added).

A dark society whose true leadership is yet to be determined with conflict often occurring. This nation has often tried to invade United Sanctuary. This nation's color is Purple.

An archipelago nation consisting of undying immortals and the enchanted inhabitants of the sea. The citizens of this nation dominate the seas of Cray. This nation's color is Blue.

Zoo is a fertile ecosystem housing the most intelligent animals on the planet, and also the most dangerous criminals. This nation produces the majority of Cray's food supplies. This nation's color is Green.