This event involves moving the My Room - Emi Sendou (Kimono) across a board game using dice acquired from Missions, Daily Logins, and by viewing the Model Room.

The cards gained from this event would not go towards the players collection, instead they allow the progression of the story and are used for a rental deck to play against the event boss, a CPU Misaki Tokura (Kimono). Once all cards are acquired, their spaces would be replaced by Kagami Mochi. There are three rounds, with the difficulty of the boss increasing after each round.

Kagami Mochi can be exchanged for select items at the exchange store.

Chances of getting roulette is as follows; 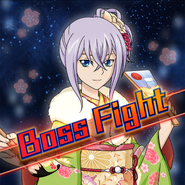 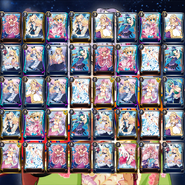 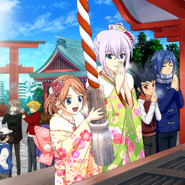 Character Costume
Add a photo to this gallery
Retrieved from "https://cardfight.fandom.com/wiki/New_Year%27s_Wishes?oldid=2884379"
Community content is available under CC-BY-SA unless otherwise noted.