"Planet Cray Story" (クレイ Wakusei Kurei Sutōrī) refers precisely to the stories about the cards in Cardfight!! Vanguard, which includes a card's profile, a group of cards, and an entire novel for certain events. They are written by Nogiri, and published in Monthly Bushiroad (previously in the daily Japanese "Today's Card" section).

It is a set of two books released on May 6, 2017, which costs 3000 yen. Each volume contains a year's worth of stories introduced in Cardfight!! Vanguard G, as well as a new story exclusive. It also includes a Steam Scalar, Sin-magir. 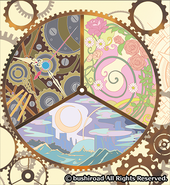