For the card, see RUMMY LABYRINTH (card).
For the booster set, see G Character Booster 3: Rummy Labyrinth Under the Moonlight

They are first introduced in Quest Begins! when they have been chosen as the official image characters of G Quest. Prior to that, Luna has been attending Card Capital 2 to learn vanguard from Chrono.

In the G Quest's quest in Magallanica branch, they performed a concert and sang the song Don't Look Back.

It is later revealed that their idol activities are actually a ruse. Am and Luna are secretly pawns in Ryuzu Myoujin's ideal, valued for their powerful imaginations which allow them to manifest the Zodiac Time Beasts into reality using Depend Cards. Luna is initially unaware of this, however Am is aware and aids Ryuzu willingly because she knows that if the Stride Gate is opened, her comatose parents will be revived. After seeing Am in pain from the strain creating depend cards puts on the body, Luna decided to do it in her place. While summoning the Zodiac Time Beasts didn't put strain on Luna's body as it had for Am, Chrono, and Ryuzu, her mind shut down and she became a zombie who single-mindedly summons the Zodiac Time Beasts in order to save Am's parents.

During the U20 Championship, Saya joins Luna and Am to form a pop star team.

Rummy Labyrinth with their trademark units in YAIBA

Rummy Labyrinth in Don't Look Back

Rummy Labyrinth in Wing of Image

New design for NEXT 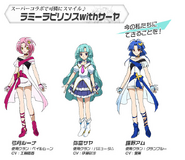 NEXT designs, including Saya

Rummy Labyrinth with Saya posing in the Under20

Community content is available under CC-BY-SA unless otherwise noted.