Ratie Curti is one of the four members of the Quatre Knights. A famous Indian cardfighter from Central Asia who is often disqualified from her matches because of her love of donuts, as she tends to prefer eating donuts instead of attending her battles. In spite of this, various world-class fighters including Kenji Mitsusada acknowledge her skills, earning her the nickname "Uncrowned Witch". She was manipulated by Raul Serra along with Neve and Gaillard into trying to stop the protagonists from finding Aichi.

At first sight, Ratie seems to be upbeat and cheery, although somewhat absent-minded, even falling into a trash can while looking for Serra. She is obsessed with doughnuts to the point that she often misses her fights because she's too busy eating them. During her fight with Kenji she showed a more mischievous side of her, warning him about how dangerous her witches are.

Like most of the Quatre Knights, she demonstrates a darker and more sinister side of her personality during her first encounter with Aichi's friends. She taunts Misaki and threatens her, saying she was going to cause despair for her and her friends. She also demeans Misaki's feelings of friendship towards Aichi, calling them illusions, and ruthlessly uses Judgement on her. Part of her perception that things such as feelings of friendship are illusions and that everything always changes is because of her early life of constantly moving, and therefore not having a chance to forge actual bonds. Additionally, Serra's manipulations seemed to work to bring out the worst in his comrades, making them view Aichi's friends as genuine threats.

Despite the fact that she does not understand friendship at first, it appears that she understood its true meaning after her second battle with Misaki and during her battle against Serra, in order to protect Aichi. She has shown care and concern for Aichi, during the time she first met him, shedding tears when she realized that Aichi had to sacrifice himself to protect both Earth and Cray before he was sealed. She also get furious when Serra betrays his comrades just to take Link Joker power within Aichi for his own goals, showing her compassion towards her Quatre Knight companions. She also have a caring side with her comrades as she cheers for Kourin to win on behalf of Aichi.

She also has a habit of saying "ぱんにゃららー" (Pan-nyarara) when she uses her "spells".

3 years after the final battle in the moon shrine, she still kept close to Aichi, even being his partner during the G Quest.

Ratie's talisman is a red ball, which she uses to transport herself and her opponents to a pocket dimensional space she calls "Fairy Masquerade Prison", a fight field atop a swamp, completely enclosed in massive thorny vines. This thorn prison is likely a reference to the Brothers Grimm fairytale "Sleeping Beauty", in which a good fairy summons a forest of trees, brambles and thorns to protect a princess who had been cursed to sleep. "Judgement" is inflicted upon a cardfighter who loses while inside this fight field; thorny vines lashing around like a tornado rise up and enclose the losing player to inflict upon them all damage dealt to both players' Vanguards during the cardfight, wounding them physically.

Before becoming one of the top cardfighters, she travels with her father as he works in a mobile doughnut stand. Her father gave her a deck and taught her how to play Vanguard and about Cray. This gave her an interest in Vanguard. During the Link Joker Invasion, she was helpless against the Reversed fighters and it ended once Aichi put an end to the invasion.

Some time after the end of Invasion, she was in Sydney and daydreams about being in Cray until Aichi shows up. Knowing he was the one that saved Cray, she develops a deep attachment towards him and gave him some of her doughnuts as a gift of gratitude. After telling him about how her heart was always in Cray and others being mirages in her perspective, Aichi requested her to be part of the Quatre Knights.

Before the time of sealing Aichi, who was the current vessel of Link Joker into deep slumber, she was present with the other knights and Aichi's associate Kourin Tatsunagi. Realizing that Aichi would have to kept in deep slumber forever, she cried as she could not bear to see him being sacrificed to keep the world safe. After some words of encouragement by Aichi that someday she will find somebody precious to be worth protecting, the sealing rites was conducted, which gives her a talisman and rendered Aichi in a comatose state.

When Serra betrayed the knights to get hold of the Link Joker seed that was in Aichi's body, she got stuck into a maze in the palace as Link Joker have complete control over Aichi, resulting in a disarray of the palace doors. She got approached by Serra and was enraged by his plans, fighting him with the final seal that meant to keep Aichi from awakening at stake. Despite her determination and using what Aichi had taught her to protect her comrades, she lost and got knocked out by her own Judgement. Before that, she silently apologizes to Aichi for failing to protect him and Misaki for her failure, with her words that she still loved everyone.

Fortunately she managed to get to the sealing area on time together with Neve to end Serra's plans. She cheers for Kourin in her cardfight against Naoki and was visually horrified that the Link Joker miasma engulfs her until Aichi woke up in time to save Kourin. During Aichi and Kai's cardfight, she noted Aichi was not as scary as last time and was fighting by his own strength. She even agreed to save Aichi from his presumed fate and encouraged that Planet Cray will work on a miracle, in which Cray did when Blaster Blade was summoned from his card form to his physical form to destroy the Seed and making Link Joker as a regular clan. In the aftermath of the battle, she noted that the moon palace was disappearing due to Aichi's fading will.

A year after the battle in the moon palace, she continues to travel with her father and decided to write a letter to Aichi.

During the events of the Vanguard Circuit, she made an appearance when the Shadow Paladins were deleted due to the work of the Deletors.

It seems that even after three years since the battle in the moon shrine, she continues her duty to Aichi by accompanying him in the United States of America during the duration of the G Quest.

Ratie plays a Shadow Paladin Deck centered around the "Witch" series. Her units focus around swapping the opponent's Rear Guards with grade 0 units from the Drop Zone, allowing Ratie to control and weaken her opponent's formation. Her ace unit, "Mesmerizing Witch, Fianna", can instead check the top 10 cards from the opponent's Deck and replace two units on their field with grade 0 units, not only greatly reducing their overall power but also lowering the number of Triggers in her opponent's Deck.

Ratie forcing Kenji to fight her

Ratie thanks Misaki for buying her Doughnuts 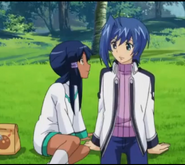 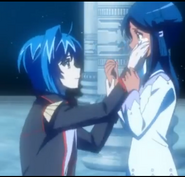 Aichi, before being sealed, comforts Ratie

Ratie and Aichi in GIRS Crisis 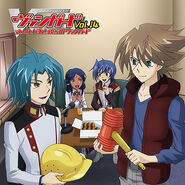 Retrieved from "https://cardfight.fandom.com/wiki/Ratie_Curti?oldid=2773343"
Community content is available under CC-BY-SA unless otherwise noted.