In both Japanese and Global versions, the card "Stealth Fiend, Oboro Cart" is not included in the gacha as it is intended to be. In response to this, said card was later granted at four copies in the players' Gift Box, while those who have already crafted it have received

x50 for each copy owned. 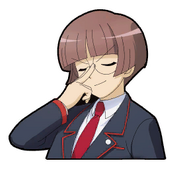 Monthly Vanguard item
Add a photo to this gallery
Retrieved from "https://cardfight.fandom.com/wiki/Shingo_Komoi%27s_Big_Lesson!!?oldid=2888571"
Community content is available under CC-BY-SA unless otherwise noted.