Dark Zone. It is themed after many brutish races such as Ogres, Demons, and Goblins competing against each other in an athletic sport known as "Gallows Bowl", which takes after real-world sports such as American football and rugby. In Gallows Bowl, however, cheating and fixed matches are prominent, and many weak players die often, as there are no rules against the use of weapons or modifications.

Spike Brothers is a highly aggresive clan that "Tackles" the opponent with high powered rear-guards that return themselves to the deck after attacking, leaving that circle open for another unit to "Tag out" and continue attacking multiple times. The clan often sacrifices defensive potential for more aggresion. 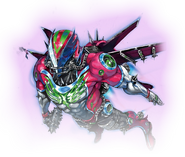 Sky Diver, with Kyou Yahagi
Add a photo to this gallery

Retrieved from "https://cardfight.fandom.com/wiki/Spike_Brothers_(ZERO)?oldid=2899619"
Community content is available under CC-BY-SA unless otherwise noted.