Stoicheia (ストイケイア Sutoikeia) is a nation on Planet Cray, consisting of the former nations of Zoo and Magallanica.

Surrounded by the Forests and Seas, Successors of the Sage
A nation born from the fusion of the land of abundant nature, "Zoo" and the land of aquatic creatures and the immortal army, "Magallanica" under the teachings of the Great Sage, Stoicheia. A land where the world’s best minds gather within the verdant riches of nature represented by the sacred tree. Stoicheia’s national power has been on a sharp rise of late, due to its abundance of resources and the unity of its people.

Teachings of the Sage
After a long period of rumination, the sage Stoicheia left behind teachings that would connect Planet Cray's future and hope. Even after their death, their will has been inherited by the nation's people. 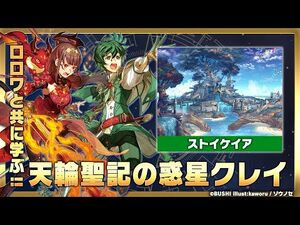 Stoicheia's Ride Lines each make use of the Nation's ability to quickly gather field presence in different ways: