Suiko Tatsunagi is a character in Cardfight!! Vanguard Anime. She is the eldest sister of Rekka Tatsunagi and Kourin Tatsunagi. She helps them run the cardshop PSY, and is a member of Team Ultra-Rare. In PSY, she handed Aichi Sendou his new ace card, King of Knights, Alfred. She seems always calm and settled as a facilitator.

In episodes 57 and 58, she, Rekka, and Kourin watched the fight between Ren Suzugamori and Toshiki Kai in Foo Fighter HQ together with Aichi, after Ren defeated Kai, he thanked Suiko for the Phantom Blaster Overlord card, though he stated he would have won even without it.

After that, she presented Aichi two cards and a choice; he could choose the card of darkness that blankets the light like Ren did, or the card of light that consumes the darkness, but the episode ended just when Aichi was about to choose. Aichi did not choose either of the two (as the light and the dark combined out of his indecisiveness and ended with Aichi receiving Majesty Lord Blaster).

Suiko's appearance doesn't change much in the series. For her civillian outfit, she wears a blue sweater with a yellow scarf in Seasons 1 and 2. When she is on the job, she wears her idol outfit.

In Season 3, she wears the female Fukuhara uniform.

The most quiet sister of the three, Suiko is able to hide her intentions quite well. Like Rekka, she is quite straight forward, though she is less forceful and is shown to admire those who are able to see their mistakes and correcting them.

When it comes to cardfighting, she is quite skilled and is not to be underestimated.

Suiko is able to see the events on the planet Cray and the planet Brandt.

Suiko was present during Misaki Tokura's fight with Rekka. Then, she, along with the rest of the Team Ultra-Rare, went to the VF Circuit.

Suiko, under the suggestion of Takuto, attends Fukuhara High School and is a part of the school's Cardfight Club.

In episode 116, she meets Naoki, who commented that she doesn't belong in a sailor uniform. This angered Suiko and shocked everyone else, excluding Naoki himself who was oblivious to what he had just done. She pays him back for this by Perfect Guarding his Armor Break Dragon with his Limit Break active then proceeded to defeat him when he had no defense left (due to Armor Break Dragon's discarding cost).

Later in the High School Circuit Qualifiers, she is paired against Naoki once more for the first match of Miyaji vs Fukuhara. Though he hesitated at first, as she Perfect Guards Armor Break Dragon without his Limit Break, he later activates it getting through her guard due to a trigger, as she stands impressed by his growth dispite being defeated by him.

Between the Qualifiers and Final, she becomes Reversed as she switches from Angel Feather to a Link Joker deck. She is defeated by Ren when he played his new Raging Form Dragon against her. Afterwards, she observes the rest of Ren's cardfights against Asuka and later Tetsu.

Though absent for the majority of the manga, Suiko appears in a flashback to when Ren, Kai and Tetsu were friends. It was she who broke the boys apart, by engaging Ren in a cardfight in which he would first make use of and become absorbed by the power of PSY Qualia.

In the second season, as well as Rekka and Kourin, she uses an Angel Feather Deck that focuses on Chief Nurse, Shamsiel.

In the manga Suiko uses an Angel Feather deck based on the Celestials archetype.

In the third season, she still uses an Angel Feather Deck. It mixes some units from her old deck (such as the pegasi, Armaros and Shamsiel) with some new ones, most notably the Break Ride. 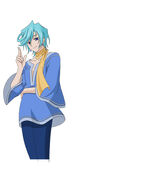 Retrieved from "https://cardfight.fandom.com/wiki/Suiko_Tatsunagi?oldid=2655719"
Community content is available under CC-BY-SA unless otherwise noted.