This article details the original history before "Chakravarti Divine" era.

"United Sanctuary" (ユナイテッドサンクチュアリ Yunaiteddo Sankuchuari) is one of the nations of Planet Cray, represented by the color yellow. A small nation, United Sanctuary is a holy kingdom of heroes that prize justice and order, ruled over by the Burton royal family of which Alfred is a member. It is primarily dominated by humans and elves, although sylphs, angels, intelligent animals, and deities play prominent roles as well, and cosmo dragons, dragons that embody light and holiness, watch over the nation as its guardian dragons. United Sanctuary has a high level of technology, and combines both magic and science. The nation is bordered by the Dragon Empire to the east and Dark Zone to the south, and is often in conflict with both of them, especially the Empire.

This nation's Zeroth Dragon is Ultima, and its Progenitor Dragon is Agnos.

This nation's successor nation during the overDress era is Keter Sanctuary.

Originally, United Sanctuary and Dragon Empire were one nation, described as a "grand sanctuary," ruled over by Sanctuary Guard Dragon. However, an ambitious dragon arose and pushed his kingdom towards collapse, and the relationship between humans and dragons quickly deteriorated, leading to a civil war and splitting the nation into two. Eventually, the dragons and a small group of humans allied with them took most of the land, the modern-day Dragon Empire, while the remaining people retreated to the west, to modern-day United Sanctuary.

During the time Void was invading the world, the clans of Cray convened to determine who would lead them against the threat, with Royal Paladin and Shadow Paladin coming to blows over which one of them would lead. This started another civil war between the two clans in the Sanctuary, which was resolved when Blaster Dark turned to Blaster Blade's side and gave him his sword, transforming Blaster Blade into Majesty Lord Blaster. Majesty Lord Blaster subsequently killed Phantom Blaster Dragon, the leader of Shadow Paladin, and united the two clans.

Void feared Majesty Lord Blaster's power, so it, through its subordinate Schwarzschild Dragon, sealed away Blaster Blade and Blaster Dark. Without their leadership, Royal Paladin and Shadow Paladin fell into disarray and were dissolved. In response, their remnants joined to form Gold Paladin to fight against Void and free their heroes in the War of Liberation. With the help of Incandescent Lion, Blond Ezel, the captured heroes were released from Void's sealing.

After the War of Liberation, the Gold Paladins were officially recognized as the second regular army of the nation. Many of the knights from the Royal Paladins which were scattered during the War were recruited by Blaster Blade as he founded the Liberators under the Gold Paladins and led by the revived Alfred. Blaster Dark returned to the Shadow Paladins and created the Revengers who operate as an assassination squad for the nation. The United Sanctuary has become the last foothold against the invading Link Joker, a clan created by Void.

Sometime later, the Dragon Empire's forces, led by Dragonic Blademaster, invaded the Sanctuary. To combat the invasion, Altmile organized an expedition force. Once they got there, Dragonic Blademaster nearly wiped out Altmile's forces. However, Gablade appeared through Stride and chased off Kagero.

Soon after, Blaster Dark "Diablo" and Claret Sword Dragon clashed over leadership of Shadow Paladin, and the latter lost, forming a clique that divided itself from Shadow Paladin. This clique would start yet another Shadow Paladin-created civil war against the sanctuary, with Fenrir allying with them for his own amusement and Gavrail being forced to fight for them due to hostages they had taken. Heroes from multiple nations, including Chronojet Dragon, Ahsha, and Altmile, joined to fight them. In the end, Chronojet Dragon transformed into Chronodragon Nextage to defeat Claret Sword Dragon, with the abyss dragon eventually being killed by its own Stride summon, Aurageyser Doomed. Shadow Paladin was disbanded on paper as a result of the civil war, but they continued to exist in the shadows, returning to protecting the Sanctuary once again.

During the world's war against Gyze and the Apostles, United Sanctuary was attacked by the Blue Wave forces commanded by Valeos.

Hundreds of years after the defeat of Gyze, when Cray's Idea, the source of Cray's deities, was shut down, the Keter Engine stopped working, throwing United Sanctuary into turmoil and desolation, including natural disasters, mismanagement, man-made disasters, and more civil wars. The Burton royal family declined, and the turmoil of the Sanctuary eventually spread across the entire world. Eventually, however, the survivors of these disasters built Ketergia, a floating island powered by the Keter Engine. Adopting a policy of isolation from international affairs, they renamed the nation to Keter Sanctuary. 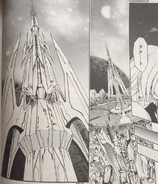 Nation's tower shown in the manga

King's throne shown in the manga