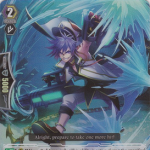 Hello, I'm Battlecardfighter (A.K.A BC, BCF, Battle, or Battlecard) and I'm from California in the United States.

Hey, I came across CfV while surfing youtube, found the anime, and really got into it. My favorite clan is the Aqua Force.

"From the ocean's depths, the one who shall bring all to an end shall surface! Time to Ride, Last Card, Revonn!"

"Reach even greater heights than before! Reach victory with your own hands! Time to Ride, Blue Storm Supreme Dragon, Glory Maelstrom!"

"Rolling with the wave of time, striking down enemies in a matter of moments! Time to Ride, Rolling Ripple, Miltiadis!"

"Thundering throught the seas, and rising to the challenge! Time to Ride, Thundering Ripple, Genovious!"

"Rolling Ripple, Miltiadis! Together with Genovious, lead your troops to absolute victory! Legion!

"In order to reach the end of this battle, I shall weather this storm! Time to Ride, One Who Surpasses the Storm, Thavas!"

Retrieved from "https://cardfight.fandom.com/wiki/User:Battlecardfighter?oldid=2817481"
Community content is available under CC-BY-SA unless otherwise noted.