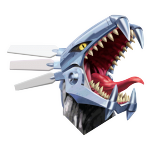 Heya! Palawi King here, but you can call me Palawi for short. As for whatever that word even means, don't ask, I've forgotten myself. All I remember is that it's a significant part of my high school memories.

I'm kind of a well-rounded guy: useful for most cases, kind of pathetic remainder of the time. A voracious eater is probably how most would describe me (ask Necrophyton about this bit), and I've got my fast metabolism to thank for that. I'm an animal lover as well, though I lean more towards reptiles, amphibians and arthropods (kind of explains my choice of clans later on, except for one). And stating the obvious, I'm also a gamer as well as an anime fan.

I'm a Tachikaze and Megacolony player, though I started with just Tachikaze in mid August of 2012 (was originally just a collector). Also, it seems like I'm the only one considered to be the legit user of those 2 clans in my locals. I also dabbled into Oracle Think Tank, Nova Grappler, and Gear Chronicle within the 4 years I've been playing, bought TDs and a few cards for slight upgrades, only to sell them after a few months. There's also that time I had Nubatama. It was great having it from when BT13 was released till January 2017. Seeing as Shiranui plus other cards being expensive heck, I had to drop the clan right there, as I was struggling to build Gaia too.

That aside, a casual player for the most part, I also enjoy competitive play a lot. After all, the thrill of competition is just revitalizing. On a note, having 2 clans, I managed to put together 7 decks of which 4 are Tachikaze, and 3 are Megacolony, and I still have got a lot of planned builds to switch around with when I fancy a change of play style (I'd make a blog about all of them, but I'm lazy). CFV aside, I've also played other card games, like MTG, Pokemon TCG, and YGO. I'd get into WIXOSS too when I have the time, but a fun game nonetheless (many thanks to GrimRevenger for teaching me).

(I'd probably add more here, if I'm not lazy that is. Also probably gonna post some of my digital work here when they're done.)

Retrieved from "https://cardfight.fandom.com/wiki/User:Palawi_King?oldid=2300413"
Community content is available under CC-BY-SA unless otherwise noted.