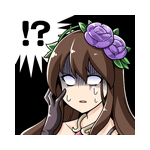 I'm a girl that loves to play card games. XD It will be the death of me. x.x

I do tend to change my icon from time to time, but I rarely do it. Right now the icon is from an anime/manga/game: a manga cover of Sougiya Riddle.

I'm quite open minded on subjects, but will voice my opinions here and there.

Currently on and off on this wikia due to busy life these days, but I do linger around the wikia just not logged in.

WIP decks: Blueish Flames (just missing the PGs, Glare, and the mates other than that I can play the deck), KoK,A/Ezzell (build is GB so yeah, just missing a few cards as well, but playable) Gear Chronicle (missing Strides and some cards, but playable), Blaster Joker (missing just 2 PGs, 1 G1, 1 G2, and 2 G3s atm), Bermuda Triangle (one more breakride to finish), and SP Witiches (missing mainly the G3s and star G2s so not playable atm), and Legend deck (will change its set-up once I get it anyways).

Decks in thoughts: AfQ (atm very tempted), AF (if new support comes, then maybe), PM (no clue if I want to), DI (in between), and Neo Nectar (kinda tempted, but dunno).

Retrieved from "https://cardfight.fandom.com/wiki/User:Rcybs?oldid=1507423"
Community content is available under CC-BY-SA unless otherwise noted.