Yuri Usui is one of the female characters seen in Season of the Cardfight!! Vanguard Anime. She's a member of Team Caesar, known as the "Empress".

Yuri is a young woman with brown hair and hazel eyes. She wears brown shorts, boots, and the top of her outfit consists of two parts, orange and white.

Yuri and her team made their professional breakthrough several years before the start of the series winning the National Vanguard Championship several times thus gaining incredible fame from doing so.

While outwardly she projects an air of grace, Yuri is ruthless in her fights and has no time for pretense. She often criticizes her brother's playstyle, considering him the weak point in Caesar, She does the same to her opponents (to a much lesser extent) like how she criticized Misaki that she played to much with her head instead of her heart. Her deck uses Miracle Beauty as a rearguard, which uses its skill to stand the unit behind it when it stands as planning toward making multiple attacks. She easily lost against Lee Shenlon during the VF Circuit.

In episode 95, she disguised herself as Queen Y in the Japan VF Circuit.

In episode 97, she fights against Misaki Tokura. She reveals to Misaki that originally her deck was an Oracle Think Tank and that she changed her deck when she, her brother, and Kenji Mitsusada formed Team Caesar. Since Team Caesar is put on hold, she went back to using her good old deck. It appears that Yuri has the upper hand when she revealed a critical trigger on her drive check causing two damage to Misaki.

Before she, Gai and Kenji became a top level team, Yuri and Gai came across an inexperienced Kenji while looking for a third member to participate in tournaments. Though she and Gai believed their skill scared him away, Kenji continued to show up and learned how to be a better cardfighter through them. Impressed by his tenacity, Yuri allowed Kenji on their team even swiching her deck to Dimension Police because of her increasing interest in Kenji. This allowed them to conquer the VF Circuit and take the championship. In commemoration of their victory, she hands the role of leader to Kenji and gives him her metal necklace.

Yuri uses a Dimension Police Deck centered around Enigman Rain. Using Rain along with Miracle Beauty, Yuri can restand an entire row back up for a full-on aggresive assault also relying on Stand Triggers to help out if Rain happens to miss.

Yuri's original deck, an Oracle Think Tank Deck, is built around the Battle Sisters, powering each other up as well as gaining hand advantage through Fromage and Cookie's skills 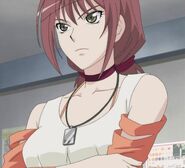 Retrieved from "https://cardfight.fandom.com/wiki/Yuri_Usui?oldid=2879331"
Community content is available under CC-BY-SA unless otherwise noted.